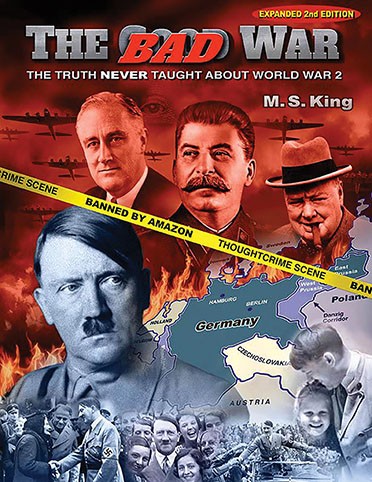 In today’s show originally broadcast on September 30 2021, Andy is joined by Dr. Peter Hammond for a show entitled, “The Real Story Behind The Bad War By M. S. King – Part 4.”

We discussed: how the Communist Party received an astonishing 20% of the vote in Germany in 1932; the mainstream media’s war on Germany following Adolf Hitler’s appointment as Chancellor of Germany; the evidence that the Communists started the Reichstag Fire; the Daily Express headline, “Judea Declares War On Germany,” in 1933; the International Communists plan to overthrow every government in the world; the secrets of Hitler’s Economic Miracle which ultimately led to the New World Order targeting Germany for destruction; former British Prime Minister, David Lloyd George’s, 1936 praise of Hitler; how in May 1936 the New York Times accused Germany of the holocaust, years before any Jews were interned in the Concentration Camps; the myth that Jesse Owens was snubbed by Hitler at the 1936 Olympics; the real reason King Edward VIII was forced to abdicate; the suspicious nature of the 1937 Hindenburg Disaster; why the mainstream media launched a hate campaign against the Anti-Communist countries of Germany, Italy, and Japan, whilst praising the Communist Soviet Union; H. G. Wells’ book, “The New World Order,” which was published in 1939; how the Allies forced Germany into war; Stalin’s plan to invade all of Europe; and many other topics.

Click Here For The Only Place You Can Still Buy The Books Of M. S. King In Paperback Or PDF Format